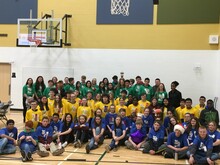 The 2019 STAR Science Olympics took place Monday, April 1 at Mother d'Youville School. Grades 7 to 9 students from across the division teamed up in groups of four to compete for the first place trophy. This year's champions were Christ the King School, who won the trophy away from last year's winners, Father Leduc.

Students tackled science, technology, engineering, and mechanics (STEM) activities that challenged their minds and put their analytical skills to the test. Teams competed in the following challenges:

"The second annual STAR Science Olympics were a great success," says Director of Student Services Michelle Symes. "The students were extremely engaged and had a lot of fun participating in each of the activities."